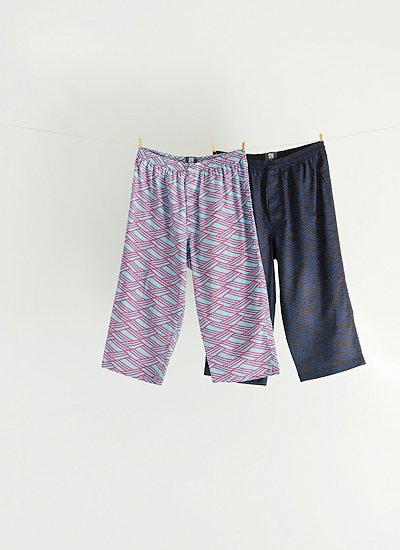 The Steteco was invented in the Meiji era to wear under a kimono or hakama. Even after European-style clothes became mainstream, the steteco was always in demand in daily life for wearing under trousers or after taking a bath, because it matched the Japanese climate and living environment. Putting on the steteco after a bath, having a beer in hand, enjoying the evening cool - in the recent Showa era that was a scene that belonged to summer.

Around 1880, Sanyutei Enyu, a rakugo storyteller from Tokyo, tucked up his kimono and danced on stage with his white half tights revealed. The dance gained local popularity and was called the steteco dance, which is reportedly the beginning of how people started to call half tights steteco.

As such, tracing their origins in rakugo, a traditional Japanese form of storytelling, steteco pants are quintessentially Japanese. Steteco are also globally unique, as they have both the functions of inner as well as outer wear.