The unique Japanese pants, steteco, are typically made of a traditional textile called cotton chijimi (cotton crape) handed down from the end of Edo Period. The textile is woven using wefts formed into a powerful ply, and its uneven (wavy or granular) surface called shibo is produced through the bleaching process utilizing the untwisting force of wefts. The irregular pattern of shibo provides the textile with a constantly dry, fresh touch and stretchability.

Cotton chijimi absorbs sweat efficiently and rapidly dries the absorbed sweat, is breathable and has moisture absorption and diffusion properties, making it the optimal material for surviving the hot and humid summer in Japan.

Several regions in Japan used to produce cotton chijimi, but the number has decreased in the recent years, making Takashima, located on the west coast of Lake Biwa in Shiga, the current main producing region. Chijimi textiles produced in this region with over 200 years of history, called Takashima chijimi, enjoy great popularity. 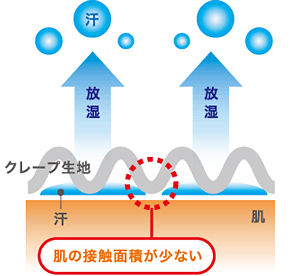